At Thomas Goldsmiths we have several talented jewellers working onsite that provide an outstanding service to all our customers.

Graduate in 1985 from the Royal College of Art with a masters degree in Arts. David has created several prestigious presentation pieces through the art of gold & silversmithing, which are now on permanent display in the Victoria & Albert Museum London. With extensive knowledge & years of experience at the bench David has also turned his hand to teaching, giving the public a small insight into the work of a goldsmith. As well as designing & making, David's flamboyant energy can also be seen preforming on stage with the Londonderry Musical Society.

A vital part of our Thomas team, Lynn graduate from Ulster University School of Art with a B.A. Hons in Fine & Applied arts in 2002 & has been a member of the team ever since. Over the years Lynn has found a love for designing & crafting large bespoke commissions such as the City Of Culture pendant & the Isaac Butt trophy. Lynn has an eye for detail, crafting beautiful fluid sculptural pieces which is evident in her Pod & Twist ranges in store. Her ability to multitask is demonstrated through her family life, work commitments & community projects, her community projects include set & costume design for numerous events each year.
Lynn played an instrumental role in identifying the significance of the Tullydonnell Hoard, which is now on permanent display in the Or, Ireland's Gold collection at the National Museum, Dublin.

Michaella joined the Thomas team in 2016 after graduating from Ulster University School of Art with a B.A. Hons in Contemporary Applied Arts, where she specialised in Jewellery & silversmithing. During her years at university, she drew inspiration from the larger city-scape metal structures & geometry, from conception her jewellery is complex & substantial but constructed in a elegant timeless manner.  Michaella's creative eye lead her to be commissioned by the University to design & create a bespoke brooch to be presented to HRH Princess Royal, shortly after this commission she was then awarded with the Craft In Business Award 2016.

Claire graduated from Birmingham City University, school of Jewellery in 2013, after which she joined the Thomas team. During her time at Thomas she took a year long career break & went traveling. During this career break Claire traveled through Dubai & China on route to Australia, where she turned her hand to many different experiences. Whilst in Australia she took on a managerial role in the retail jewellery industry, & worked on improving their customer services policies.
Now that Claire has returned & firmly re-planted her feet under the work bench, she is continuing to work closely with customers to create elegant, modernist pieces. 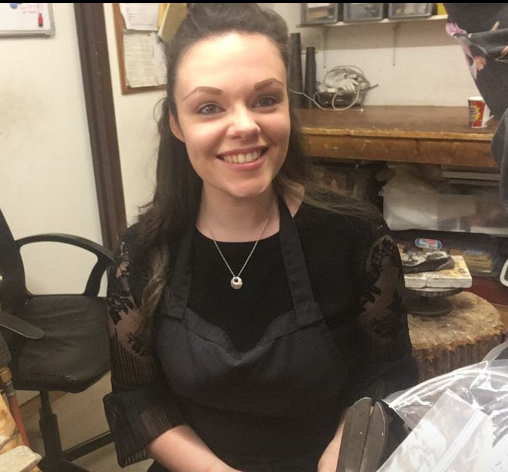 Before joining the Thomas team in 2020, Rionach trained as a classical soprano and appeared in various shows and operas throughout Ireland. In 2009 Rionach was awarded RTE Lyric FM award and bursary and continued her studies at the Royal Irish Academy Of Music in Dublin. For a number of years Rionach has enjoyed teaching singing and drama to young people in her hometown in Derry. In 2019 she appeared singing live on Fleadh TV on TG4. In 2020 Rionach has taken on the role of Administrator and aims to create a warm & hospitable place for all customers.

Barley became a Thomas team member in 2012 & has been an instrumental part of the team ever since. His cheery nature & passion for working with the public make him the perfect meet & greeter for the shop.